Here is an Example of Localization in React Native Multi Language App. Localization is the process of making something local in character or restricting it to a particular place. In case of application development, it is related to the development of the application according to the local language.

For the localization, we are going to use LocalizedStrings component from react-native-localization library.

Here is the code snippet of LocalizedStrings we have used in this Example.

In this example below, we will make a home screen to select the language and will show the text content on the next screen accordingly from a common string repository where we have defined same text for each language code. 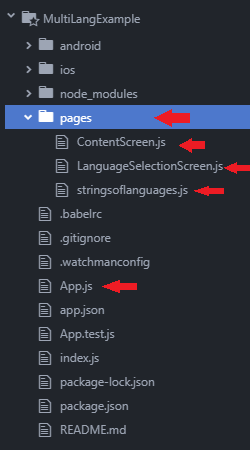 This is how you can make a multi-language React Native Application (Localization). If you have any doubt or you want to share something about the topic you can comment below or contact us here. There will be more posts coming soon. Stay tuned!