This is an Example to Make Phone Call, Send SMS or Email Using React Native Communication. We will use the Communications Component provided by react-native-communications. This is a very easy to integrate library which can be used for a very useful task like Making phone calls, Sending Text SMS or for Sending Emails.

The most important point to note here is that all the things will trigger the respective applications to handle the task like when we call a function to make a phone call it will open Dialer application with prefilled number supplied by us from our App. Similar to the SMS and mail.

In this example, we will see 4 types of different activity:

Now let’s get started with the example.

Here are the code snippets to perform above-mentioned activities:

For this example, we will make a home screen with 4 different buttons to make a call, to Send SMS, to Send Email and to open a URL in browsers.

To use Communication we need to install react-native-communications dependency.

–save is optional, it is just to update the react-native-communications dependency in your package.json file. 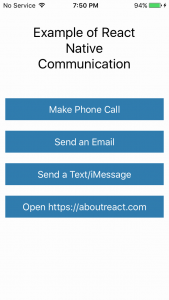 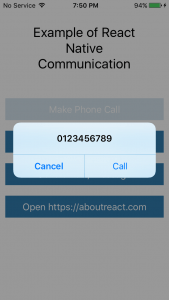 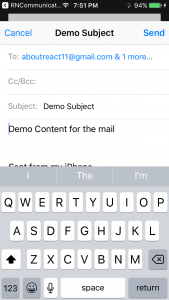 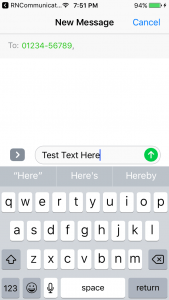 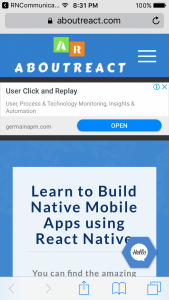 This is how you can Make Phone Call, Send SMS or Email Using React Native Communication. If you have any doubt or you want to share something about the topic you can comment below or contact us here. There will be more posts coming soon. Stay tuned!