This is an Example to Convert any Input Value in MD5 in React Native. We will use the function md5() to convert our Input Text into MD5. You need this useful example while making your login and registration screen because we do not store the user’s password as it is; we first encode the password and then stores it in the database. Encoding password in md5 is the basic encoding and not recommended for the high-security platforms instead of that use SHA256 encoding for the password. You can also encode the password with both using MD5 and SHA256 after each other which will make the decoding of the password nearly impossible.

MD5 stands for ‘Message-Digest algorithm 5’. The MD5 algorithm is used as a cryptographic hash function or a file fingerprint. It is non-reversible and very safe for password security.

To use md5() we have to install md5 package.

This command will copy all the dependencies into your node_module directory, You can find the directory in node_module the directory named md5. –save is optional, it is just to update the md5 dependancy in your package.json file. 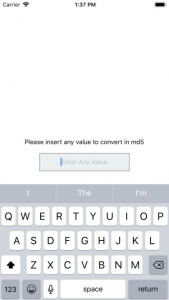 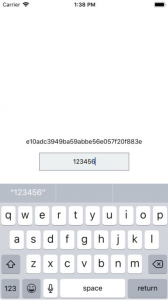 This is how you can convert any Input Value in MD5 in React Native. If you have any doubt or you want to share something about the topic you can comment below or contact us here. There will be more posts coming soon. Stay tuned!