Here is an Example to Add Event in Device’s Calendar from React Native App for Android and iOS. In this example, you will see how easily you can add any event in your device’s calendar from React Native App. While planning this example I was thinking it is going to be very tricky to open the calendar of the device and how to the callback for the success of addition or cancellation but after finding react-native-add-calendar-event library everything became very easy. This library starts an activity (in Android) or shows a modal window (for iOS) to add, view or edit events in the device’s calendar. It provides a promise in return, with the help of that you can find out if a new event was added and can get its id.

To add an event in the calendar

In this example, we will show the title and the time of the event on the top of the screen which we are going to add in the calendar. Timing of the event will be current time so that you can see the event notification in your device calendar.

1. To add an event in the device’s calendar we will use AddCalendarEvent component and for that install react-native-add-calendar-event dependency

After the updation of React Native 0.60, they have introduced autolinking so we do not require to link the library but need to install pods and to install cocoa pods use

Time format for the event

If you are working with any date-time in JavaScript you need a proper time format and according to the standard, we should use UTC format which us a standard format and used in many places. In this example also we have used UTC time formate for our start and end date.

As I have told you earlier that we are going to use moment.js for that so here is how you can get the current date-time in UTC format using moment.js0

To know more about moment.js you can visit: 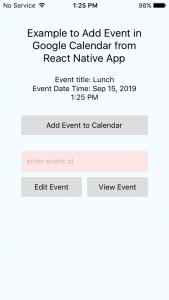 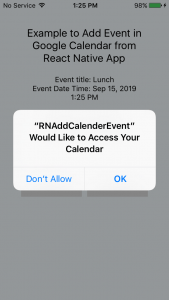 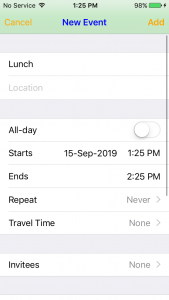 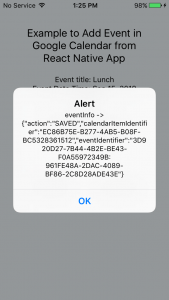 This is how you can add an event in the device’s calendar from React Native app for Android and iOS. If you have any doubt or you want to share something about the topic you can comment below or contact us here. There will be more posts coming soon. Stay tuned! Hope you liked it. 🙂