For this example, we are using Card component provided by react-native-paper.  So let’s get started.

Open the terminal and jump into your project using

To use Card we need to install react-native-paper and react-native-vector-icons packages. To install these run the following command

Now we need to install pods 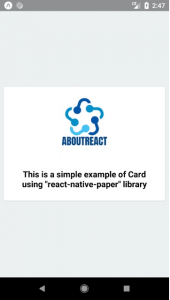 That was the React Native Card View using react-native-paper. If you have any doubt or you want to share something about the topic you can comment below or contact us here. There will be more posts coming soon. Stay tuned!