Information about the net connection is very helpful when you are making an application which only works in online mode. The best example that you have seen is the YouTub app which will run smoothly and if you unexpectedly goes offline it generates a bottom snack alert to notify about the offline state.

Note: While getting internet connection information using NetInfo we attach a call back function with it. NetInfo provides the network information in this callback function but we can’t say it will call the function once or twice so there is no pattern that can define the number of calls from the NetInfo. Yeah, it is very sure it will call the function immediately after network state changes but still can say it will inform just once so you have to make your own logic with React Native state to handle the situation.

In this example, we will print the state of internet connection on the console.

To Import NetInfo in Code

To Get the Network State Once

To Unsubscribe the Network State Update

To use NetInfo we need to install @react-native-community/netinfo dependency.

Permission to Access Network State and other configurations for Android

We are accessing the network state so we need to add some permission in AndroidManifest.xml file (For Android) after ejecting the project from expo environment.  On devices before SDK version API 23, the permissions are automatically granted if they appear in the manifest but after SDK version 23 android applies new permissions model. For more about the permission, you can see React Native Android Permission.

So we are adding going to add the following permission in the AndroidMnifest.xml

By adding permission in AndroidManifest.xml you are able to access ACCESS_NETWORK_STATE of your devices. 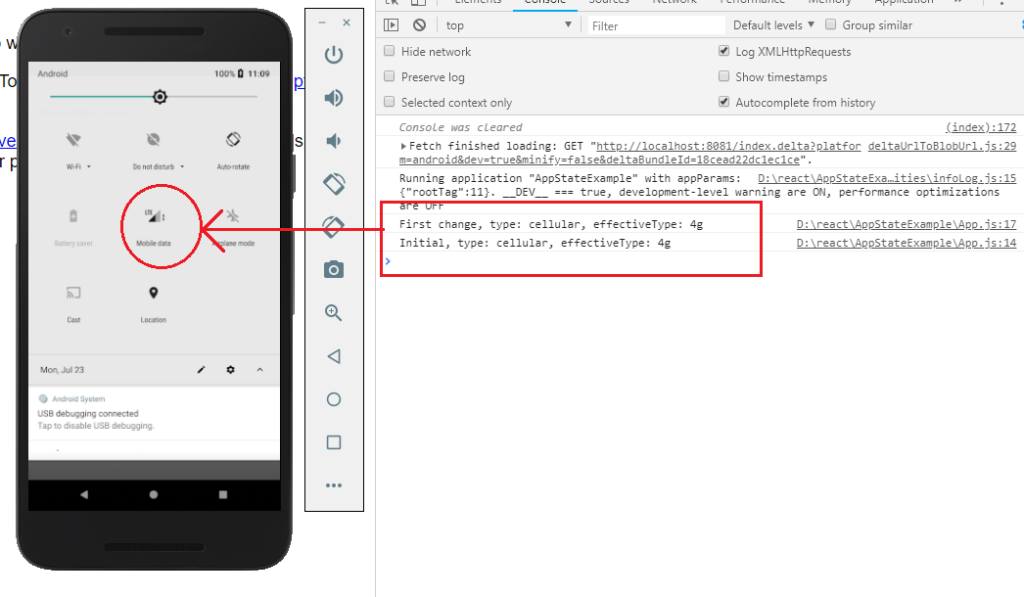 That was the React Native NetInfo. If you have any doubt or you want to share something about the topic you can comment below or contact us here. The remaining components will be covered in the next article. Stay tuned!