React Native Touchable is built in to React Native core which is a wrapper around the various Touchable* components in order to use TouchableNativeFeedback whenever possible.

If we talk about Android devices TouchableNativeFeedback provides the Native experience but it is only supported by the Android and not supported by iOS, So in case of iOS, we generally use TouchableOpacity as an alternative solution for the iOS.

In the above situation, we have two choices either we use a common Touchable which is TouchableOpacity (Best for both platform) or identify the platform and then apply the Touchable accordingly. If you want to use the first method then it’s OK, you can proceed with that but if you want to provide the Native experience to your App users then you should go for the second one which makes the code lengthy (not much but a little bit).

react-native-platform-touchable library bought a simple component Touchable for the second case mentioned above. It is a wrapper over various Touchables which makes life very easy. You just have to install the dependency and you are good to go. It will handle all the conditions and will use the Touchable according to the platform to provide the best experience.

TouchableNativeFeedback with background from Android app style for Android API <= 20

In this example, we will make a simple button with Touchable component to show the rendering of different Touchables according to a different platform. So let’s get started.

For this example, we will make a home screen with 1 button using Touchable.

To use Touchable we need to install react-native-platform-touchable dependency.

–save is optional, it is just to update the react-native-platform-touchable dependency in your package.json file. 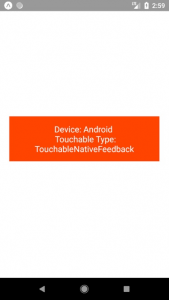 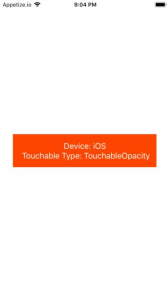 This is how you can Make React Native Touchable using react-native-platform-touchable. If you have any doubt or you want to share something about the topic you can comment below or contact us here. There will be more posts coming soon. Stay tuned!