This is an Example to Show Timeline using React Native Timeline ListView in Android and IOS. Timeline is very useful to show event activity or progress. Timeline list can be used in many places. For this example, we have used Timeline component provided by react-native-timeline-flatlist.

As ListView has been deprecated in React Native 0.60+ we have updated this example for the FlatList. Enjoy 🙂

Now coming back to the example. In this example, we are making a view with buttons in a horizontal scroll view on top and the main view which will hold the different type of Timeline components. On click of the top buttons, we will change the component in the main area. It is kind of an Activity holding different fragments for those who have no idea about the last line don’t worry you can visit How to Make a View Like Android Fragment in React Native to have an idea about that.

So let’s start with the example.

To use Timeline we need to install react-native-timeline-flatlist dependency.

This command will copy all the dependency into your node_module directory. –save is optional, it is just to update the react-native-timeline-flatlist dependency in your package.json file.

As the example has 10 different screens and is very long I am making an App.js which will be the main screen and other screens are like independent components so I’ll post the code and then a screenshot of it. If you are facing any issue with that then you can comment below so that I can update the post accordingly.

For this project, you have to create a project structure as shown below. You can also download the files from here. 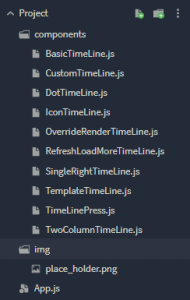 This will be our main landing screen which has some buttons on the top in the horizontal scroll view. On pressing the buttons, we are returning different views to show.

After creating the main screen now you can see the screenshot and the code for different Timeline.

This is how you can show Timeline using React Native Timeline ListView / Flatlist in Android and IOS. If you have any doubt or you want to share something about the topic you can comment below or contact us here. There will be more posts coming soon. Stay tuned!