In this example, you can add the events in a calendar using an event array. You just need to pass the date and time (or some other elements if you want) of the event as a JSON array and this will show you all the events on the calendar. You can use click on the calendar event to get further details of the event.

In this example of Calendar with Events, we will make a calendar with some event listed from a dummy event array. If you want you can use web-services to fetch the data as an array from the server and pass that array in events prop of  EventCalendar. So Let’s get started.

To use EventCalendar component you need to install react-native-events-calendar package.

To install this Open the terminal and jump into your project

This command will copy all the dependencies into your node_module directory. –save is optional, it is just to update the react-native-events-calendar dependency in your package.json file. 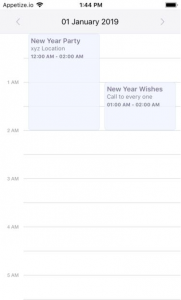 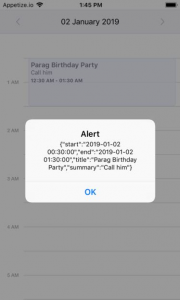 That was the Example of Calendar with Events Listed in React Native. If you have any doubt or you want to share something about the topic you can comment below or contact us here. There will be more posts coming soon. Stay tuned!