Here is an example of React Native Show Message for empty FlatList. As the topic name describes we will show the Message for the empty list. We can use this while we are making a dynamic list and the data is coming from the server. After loading the data from the server we can directly set the DataSource to the list by defining the props ListEmptyComponent of FlatList. This will show the error message which you have set for the empty list but if the DataSource has some value it will render the List.

Here is some line of code which we have used to show the message for the empty List.

To start with this example 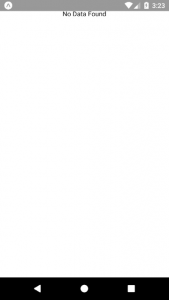 This is how you can show the message for empty FlatList. If you have any doubt or you want to share something about the topic you can comment below or contact us here. There will be more posts coming soon. Stay tuned!