This post will help you to Learn How to Manage State in React Native. Components are the UI that helps to design your imagination but the real data in the app is managed by State and Props. Here is an Example of React Native State.

Props and State in React Native

Props are set by the parent and they are fixed throughout the lifetime of a component. For data that is going to change, we have to use State. A state should be initialized in the constructor, and whenever you want to change the value of any state variable you should use setState. The state is very easy and tricky at the same time. As it depends on you how to use it. Let’s take an example.

We have two texts and the value of the text are just some numbers. The numbers are increasing and decreasing every second. To perform this action in other languages

But in case of React we bind the state of variables with each text and in every second we just set the state which will result in the re-render of the view.

Here is the example to Manage State in React Native. 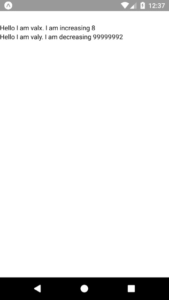 That was the React Native State. If you have any doubt or you want to share something about the topic you can comment below or contact us here. The remaining components will be covered in the next article. Stay tuned!