If we have to share any small data between different users, we can use the QR Code. Generation of QR Code in React Native is very easy as we just have to install react-native-svg and react-native-qrcode-svg package, which will provide <QRCode/> component to make QRCode.

QR Code is known as Quick Response Code is a trademark for two-dimensional barcode. QR Code is a machine/camera readable block enabled code for encoding numeric value and alphabetic value. The QR Code stores information within a block of images and can store multiple types of information.

In this example we are making an TextInput to get the value for QR Code and after clicking on “Generate QR Code” it will generate the QR Code.

You can also see how to make Barcode and QR Code Scanner using Camera in React Native.

1. We need to install react-native-svg dependency to have svg support

2. To use QRCode you need to install react-native-qrcode-svg dependency

This command will copy all the dependencies into your node_module directory. –save is optional, it is just to update the react-navigation dependancy in your package.json file.

After the updation of React Native 0.60, they have introduced autolinking so we do not require to link the library but need to install pods. To install the pods use

Code for the Generation of QR Code 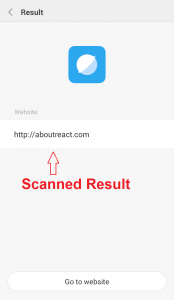 That was the React Native Generate QR Code. If you have any doubt or you want to share something about the topic you can comment below or contact us here. There will be more posts coming soon. Stay tuned!

2 thoughts on “Generation of QR Code in React Native”