React Native Map Example is to integrate the Google Map into your React Native Application. To integrate the Map in our example we will use a very good library called react-native-maps. Which provides MapView component which is very easy to use. So let’s get started.

To use MapView we need to install react-native-maps package. To install this

–save is optional, it is just to update the react-native-maps dependency in your package.json file.

To use react-native-maps library we have to link some dependencies for React Native version<0.60 as RN ).60 brought the auto-linking feature. In order to link the library, you have to run following command

React Native 0.60+ has auto-linking feature but still we have to install the pod file after the linking of the libraries. So for that run

This is how we have installed the dependency. Now to open the google map in the app we have to get the API key for from Google Developer Console and to do that please follow the below steps.

After creating the project you can see all of your created project a drop-down in the top left corner. Now select the project from the dropdown and goto to the credential section.

You can find the create credential option there.

7. Now after enabling the API key, we have to add this API key to our project’s AndroidManifest.xml file. Just copy the following lines and paste it into your manifest file with your generated API key.

Please note that we have used customMapStyle={mapStyle} which is for the custom styling of the map in which you just have to provide the mapStyle JSON which will help you to customize your map. To get the custom style JSON please visit https://mapstyle.withgoogle.com/.

Apple maps will also have the same features as google map has but if you want to keep your cross-platform application align then you have to draw a Google map in the IOS application too.

So to do that you have to add provider={PROVIDER_GOOGLE} prop in the <MapView /> but if you simply add the PROVIDER_GOOGLE in the MapView and run it you will face the following “react-native-maps: AirGooglMaps dir must be added to your Xcode project to support GoogleMaps on iOS” error.

To solve this error we will add AirGooglMaps dir in the Xcode project as suggested by the error itself.

1. First of all, open the pod file of the iOS project and add the following line as given in the screenshot

2. Now open the terminal, jump into the project and install the pod using

4. Now drag that folder into your project’s main directory. For example, my project is RNMapExample so I selected AirGooglrMaps and dragged it into the RNMapExample directory in Xcode. After that, it will ask to choose options for adding these files. Please note you must have to select “Copy items if needed” and “Create groups” options.

5. After doing that you can see the additional AirGooglrMaps directory that is what our error said.

6. Now we have to add an additional flag for that first select your project then please select Build Settings after that search for the preprocessor and click <Multiple Values> in front of Preprocessor Macros. Here you will see a popup please click on add sign and it will give you an option to add some value. Please add the following value into that 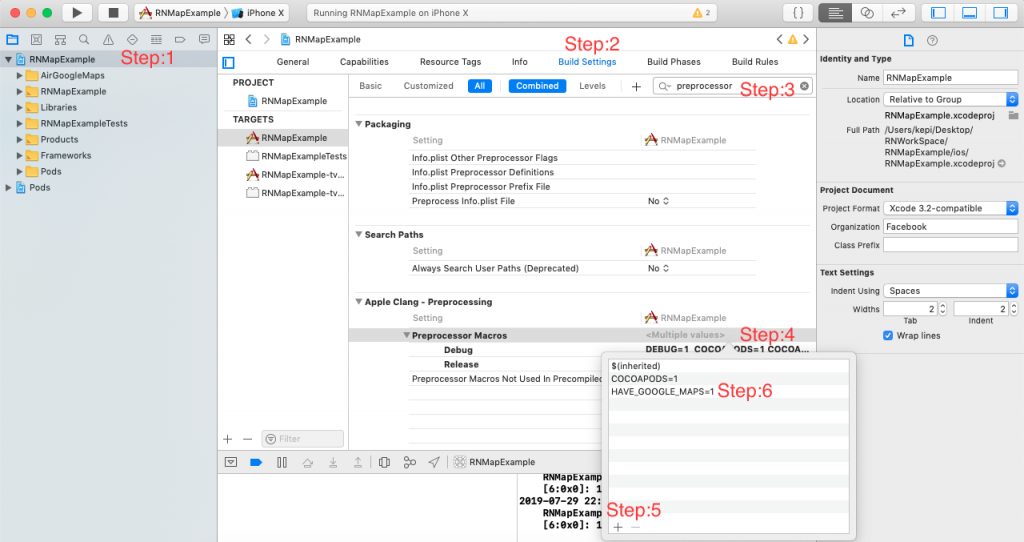 7. Now open AppDelegate.m file of the mail project and copy following lines as give n the screenshot.

In the starting of the first function

Please replace “Your Google API Key” with the API key we have generated from the Google Console.

Now we are ready for the Google Map in the iOS 🙂

Please replace the code of App.js with the following code for the Google Map in iOS also. Here we are just adding an addition prop provider={PROVIDER_GOOGLE} in the MapView.

This is how you can integrate Google Map in your React Native Application. If you have any doubt or you want to share something about the topic you can comment below or contact us here. There will be more posts coming soon. Stay tuned!