In this post, you will see 4 Different Type of React Native ‘Touchable’. React Native Touchable is a component to overcome the limitation of the styling of button component. There are four types of Touchables. Which are

A wrapper for making views respond properly to touches (Android only). On Android, this component uses native state drawable to display touch feedback.

To Import TouchableNativeFeedback in Code

A wrapper for making views respond properly to touches. On key down, the opacity of the wrapped view is decreased, which allows the underlying color to show through, darkening or tinting the view.

To Import TouchableHighlight in Code

A wrapper for making views respond properly to touches. On key down, the opacity of the wrapped view is decreased, dimming it.

To Import TouchableOpacity in Code

Don’t use unless you have a very good reason. All elements that respond to press should have visual feedback when touched but it doesn’t have any.

To Import TouchableWithoutFeedback in Code

In this example, we will see all the four Touchables. So Lets’s get started. 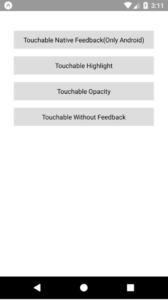 That was the 4 Different Type of React Native Touchable. If you have any doubt or you want to share something about the topic you can comment below or contact us here. The remaining components will be covered in the next article. Stay tuned!