How to Make a Phone Call in React Native?

In this example of making a Call from React Native App, we will open the contact number on a click of a button in the dialer to call directly using a call(args) provided by react-native-phone-call. So let’s get started.

To use call we have to install react-native-phone-call package.

This command will copy all the dependencies into your node_module directory. –save is optional, it is just to update the react-native-phone-call dependency in your package.json file.

Code to Make a Phone Calls

This example will not work with IOS simulator as simulator do not provide the phone call facility in case you try to run on the simulator you will get “invalid URL provided: tel:XXXXXXXXXX”.

Error while running this example on IOS simulator

FAQ:
1. How to call without having to press the call button?
2. How can I call directly from my react native application without opening the Dialler?
Ans: Sorry but this is not possible with this example. This is a cross platform example which does not provide the same. If you need that in any case then you can see react-native-immediate-phone-call, with that library no additional user input is required for Android and the call starts instantly (Apple always asks confirmation since the last iOS updates…) 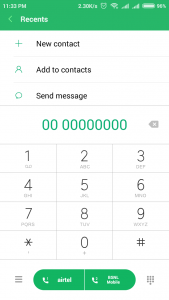 This is how you can make a phone call from the React Native App. If you have any doubts or you want to share something about the topic you can comment below or contact us here. There will be more posts coming soon. Stay tuned!