When the user presses the Android hardware back button in React Native, react-navigation will pop a screen or exit the app if there are no screens to pop. This is the sensible default behavior, but there are situations when you might want to implement custom handling. This is where handling android back button is useful. You can also check react-navigation-backhandler library to handle the back press.

To handle the Android Back Button Press in the react native we have to register the hardwareBackPress event listener with a callback function, which will be called after pressing the Back Button. We should also remove the listener when we are jumping out from the screen (where we have added the listener) because sometime after going to the next screen or any other screen the listener remains active in the background if the last screen is in the stack and not killed by the system.

3. To handle the event we have used the function handleBackButtonClick.

Why not use component lifecycle methods?

At first, you may be inclined to use componentDidMount to subscribe for the back press event and componentWillUnmount to unsubscribe. The reason, why we do not use them, is that they are not generally called when entering or leaving a screen.

Similarly, when going back from B to A, componentWillUnmount of B is called, but componentDidMount of A is not because A remained mounted the whole time.

So here was the big discussion. Now Let’s start with the code.

In our example, we are going from FirstPage to SecondPage using navigate and after clicking Back Button on SecondPage we will navigate to ThirdPage with an alert. We have also used this.props.navigation.goBack(null); on ThirdPage to popup the default screen. So let’s get started.

To start with this Example you need to create a directory named pages in your project and create three files FirstPge.js, SecondPage.js, and ThirdPage.js. 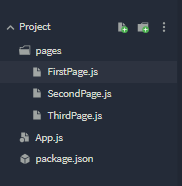 Open pages/FirstPage.js in any code editor and replace the code with the following code.

Open pages/SecondPage.js in any code editor and replace the code with the following code.

Open pages/ThirdPage.js in any code editor and replace the code with the following code.

That was the way to handle the Android Back Button. If you have any doubt or you want to share something about the topic you can comment below or contact us here. There will be more posts coming soon. Stay tuned!

2 thoughts on “Handling Android Back Button Press in React Native”