So Let’s get started.

What is Android Permission?

According to Google’s privacy policy, a user should know which application is trying to access sensitive data such as files, contacts and SMS, as well as certain system features such as camera and internet. So they introduced Android Permission feature.

In Android permission modal every applications which is using sensitive data or some certain system features have to ask for the permissions from user.

The purpose of permission is to protect the privacy of an Android user.

Why We have to Ask for Permission?

Android applies the permission modal because some of the applications were tracking the user’s location in the background and accessing the private data like contacts, call history and messages without informing the user which is the violation of googles privacy policy.

So to solve this sensitive issue application have to ask for permission to access those sensitive data.

How to Ask for Permission in Android?

Now you have an idea about the Android permission, let’s see how to ask for the permission in Android.

To ask for permission in Android you have to follow two steps:

1. You have to add those permissions requests in project -> app -> src -> AndroidManifest.xml file.

For Example, if we want to ask for the Camera Permission we have to add the following permission request in AndroidManifest.xml

On devices before SDK version 23, the permissions are automatically granted if we add those permissions in our Androidmanifest.xml file but after SDK version 23 you have to ask runtime permission as well. If you are targeting the Android version < 23 then you can skip 2nd point.

According to the official docs, dangerous permissions require a dialog prompt.

So whenever you are working with this dangerous permissions you need to check whether the permission is granted by the user or not and that can be done with the help of PermissionsAndroid in React Native.

Run Time Permissions that Requires Confirmation from the User

Hope you have understood the run time permission now. Let’s have a look at how to ask for the Run Time permission in React Native.

Above mentioned all the dangerous permissions comes under PermissionsAndroid.PERMISSIONS as constants.

You can check the permission granted or not using PermissionsAndroid.RESULTS.GRANTED

To ask for the permission use

Available as constants under PermissionsAndroid.RESULTS:

Now we have an idea about Android permissions and components. Let’s move towards the Example which can help you to ask permission in your application.

Example to Ask for the Run Time Permission

Now jump into the project using 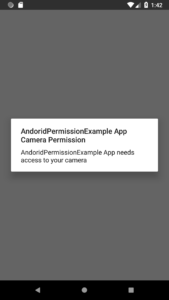 That was the React Native Android Permission. If you have any doubt or you want to share something about the topic you can comment below or contact us here. The remaining components will be covered in the next article. Stay tuned!