This is an Example of React Native Navigation Drawer for Android and IOS. We will use react-navigation to make a navigation drawer in this example. React Native Navigation Drawer is a very popular component in app development. It provides you to manage the number of app options in a very easy manner. A user can navigate from one screen to another screen very easily by just pulling out the drawer. Here is an example of a navigation drawer.

In this example, we will make a navigation drawer with Three screens. So let’s get started.

4. Install react-native-reanimated for the drawer animation (Used internally by react-navigation-drawer)

These steps are enough for the drawer navigation but in this example we are also using createStackNavigator to switch screeens, so please follow the next step also

To start with this Example you need to create a directory named pages in your project and create three files Screen1.js, Screen2.js, and Screen3.js in it.

To have the drawer Icon in Action Bar you have to make an image directory in your project and have to copy any drawer image with name drawer.png (For this example. You can change if you want but you need to change the file name in code too). 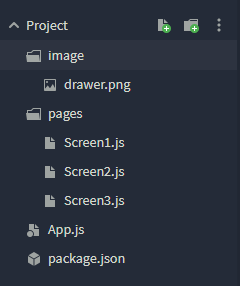 Here is the drawer.png if you want to download.

Open pages/Screen1.js in any code editor and the Replace the code with the following code.

Open pages/Screen2.js in any code editor and the Replace the code with the following code.

Open pages/Screen3.js in any code editor and the Replace the code with the following code.

That was the React Native Navigation Drawer. If you have any doubt or you want to share something about the topic you can comment below or contact us here. There will be more posts coming soon. Stay tuned!